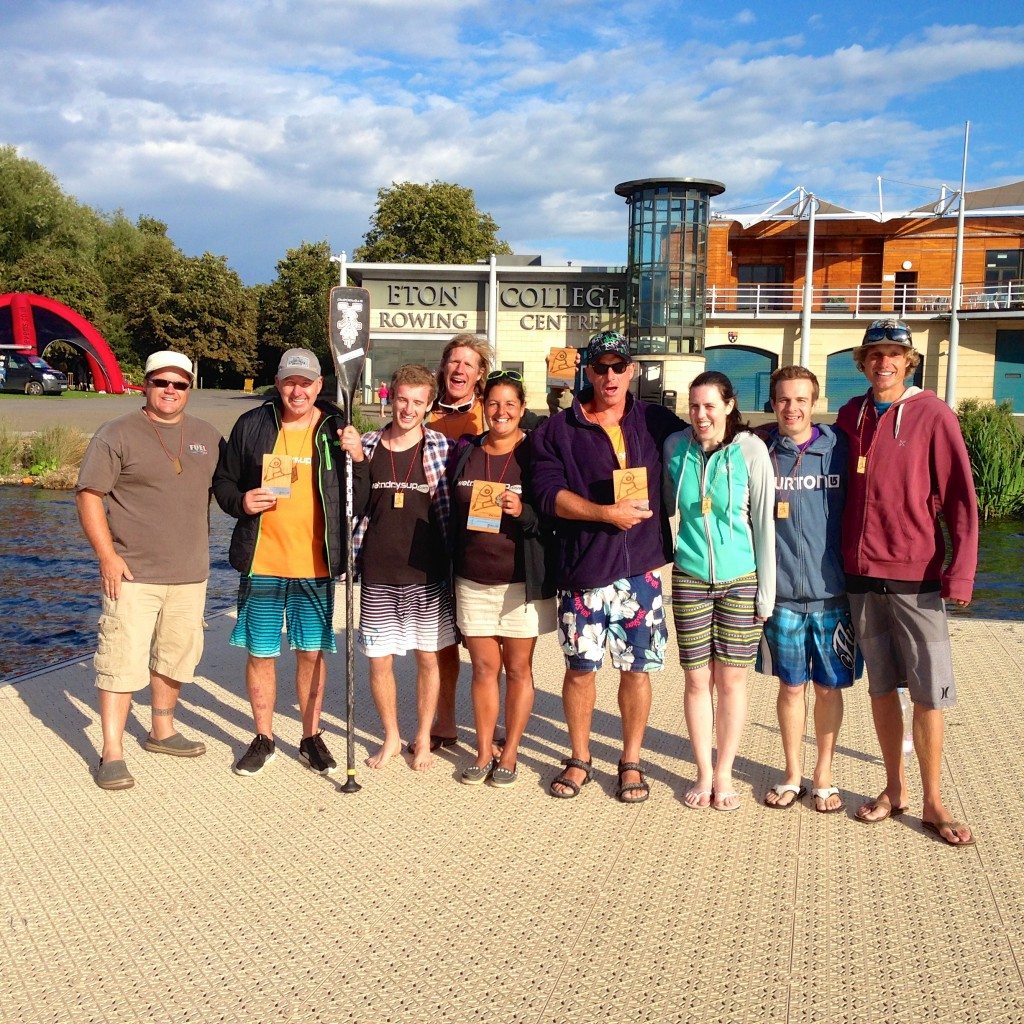 Back on Saturday 23rd August a small team of just 10 paddlers from Wet’n’Dry SUP attended the National SUP Club Championships at Eton Dorney. Without any real race training and there more for fun than glory, we’re still stoked and so proud to have come home with third place overall! Here’s our story…

We met up on Friday night to set up camp at Bray Lake, just around the corner from the event site. After a good bit of chat – and maybe a sneaky beer or two by way of ‘race preparation’ – we did at least get to bed before midnight ready for action the following morning. We left at 8.30am, driving in convoy 10-minutes around the corner and onto the amazing venue of Eton Dorney: host to the 2012 Olympic Rowing Regatta. We completed registration and hooked up with our last two team members: Jamie H had again driven up from the West Country (‘home’ is Chelmsford, hence he has joined our team at both National SUP Club Champs!) and Dan had pulled on his leathers and mounted his bike to blat across from Essex that morning. Registration done, we grabbed a bite to eat, pumped up our boards and enjoyed the super-friendly atmosphere around the brand stands at the head of the course.

And so to the racing – first up was the XO (crossover) class for those who had never raced before. We had two entries: ‘New’ Stuart put in a great paddle to finish 7th man on a Starboard Freeride; And although just her 5th time on the water (having completed a ‘Learn to SUP’ course with just us a couple of months ago), Jo still took some scalps around the 6km course to finish 10th woman.

Then it was time for the full-on 8km raceboard event, with the four classes departing at 3-minute intervals. The course was three laps – each lap starting under the Olympic bridge, first heading into the wind up the recovery lane, then turning around the bank and returning towards the boathouse down the Olympic course proper. First off was the men’s 14′ class, including Jamie Dodds (Red Air Elite 14′) and ‘Step-Back’ Stuart (Starboard 14′). Jamie took 5th master with Stu crossing the line just a couple of places behind to finish 2nd veteran – an awesome result in his first SUP race!

Next up was the biggest class – men’s 12’6″ – where we had five entries in the open (18-40) age category. The pace at the front was again frantic, but with a full season’s racing under his belt Jamie H (Starboard All-Star 12’6″) stayed fully in contention with the leaders the whole way round, and was unlucky not to podium – finally finishing 5th. Still in touch with the lead group was Nathan (Starboard All-Star 12’6″) in 8th, followed by Duncan (Starboard Sprint 12’6″) in 10th, Chris (Starboard Sprint 12’6″) in 13th and Dan (RRD 12’6″) 15th. We all grouped up across the line to welcome our final finisher home…

…it turns out they’d waited a full 5 minutes before starting the women’s 14′ class, but it wasn’t long until Elisa (Red Paddle Elite 14′) came charging in – the first women’s inflatable across the line by some distance – a very strong second place in the 14′ class, ahead of a fleet of solid boards, and just a minute behind the winner.

Main races done, we were all pretty happy with our performances so decided to enter a couple of scratch teams into the relay races. First off was the XO class, in which (despite a broken finbolt on our borrowed board!) ‘Step-Back’ Stuart , Chris, ‘New’ Stuart and Duncan took third place. Then in the full-on raceboard relay, Nathan, Elisa, Jamie Dodds and Jamie H narrowly missed out on a podium place with 4th in a hectically fast race. And at last we could all relax – job done!

And so we packed up and returned to the prizegiving to see El and Stu receive their second places, and take our XO relay bronze … but not expecting too much of an overall result against so many much bigger clubs. First and second places were a foregone conclusion – it could only be all-conquering Bay SUP and local Bray Lake. The countdown began at 10th: we were relieved enough not to have finished last. As the following places were announced, we celebrated beating the likes of Blue Chip, Suffolk SUP, and Central SUP  … but by the time fifth place was announced and it still wasn’t us, we’d begun to worry we might have been overlooked. But then, “3rd place, Wet’n’Dry SUP” ahead of Lagoon Watersports! It took a little while to sink in, but we eventually made it to the podium to collect our 3rd place trophy and medals all-round. After basking in our glory with a couple of team photos, we headed out for a celebratory meal at the nearby Palmer Arms pub before taking the drive back home.

So, we have a third place to defend next season! With classes for various ages from under-14 right up to 60+ we’re hoping to take a much bigger team to Eton Dorney next season – all comers very welcome. Keep a look-out for ‘race training’ meets on our calendar and www.facebook.com/WetnDrySUP